Tech Tuesday - Do You Use Vocabulary.com's Free Service? Read This!

There are some changes coming to the vocabulary.com free service.  If you are like me, you've been using their free service because your school wants to spend money...elsewhere.  The free service is FANTASTIC and the only drawback is that you cannot see student performance, but that is easily rectified by having students show you their screen or screenshot.

I noticed a little while ago, I had been given a free trial for premium service.  I did not think much about it until a teacher friend of mine said he was blocked out of his classes and that he had heard vocabulary.com was ditching their free service.  I could still access mine, so I contacted the company.  They responded very quickly on a late Friday afternoon.  That impressed me.  Representative Srob O gave me this reply:

Hello Mark​​,Thank you for your message. Your friend is right, due to our parent company's vision for us, we've made some changes to the way basic accounts on Vocabulary.com can use the program. The ability to create classes, assign work, and track data for your top three students will no longer be available with a basic account. You'll still be able to play The Challenge, create lists, host Jams and log-in to your account as a user. One thing I do want to point out is that these changes will not affect the program for your students. They can still log in, find lists connected to your class, and do work on their own. Additionally, you will still be able to create lists and share the URLs with your students externally to have them work independently. To get the URL for Practice, just click on a list then click the "Start Practice" button. The URL will always be the list ID /practice. For example, https://www.vocabulary.com/lists/6116552/practice. My apologies for any inconvenience this may have caused. If you have any additional questions, let us know. We're happy to brainstorm more ways to make use of new more limited free version. I'm confident we can find a way to create continuity in your students word learning. Let me know a time and best number to reach you at and I'd be more than happy to call you to discuss these matters.

So what does this all mean?  Well, I plan on continuing my use of their free service even though I cannot assign a list to a class.  If I can just assign a link, that should work, but I won't know for certain until my premium service runs out.

Let me know if you are using it the new way, any problems you might have or solutions to them, and if you know of other comparable services in the comment section.

Writing random snippets is a challenge for young writers (and old) that helps to focus on voice.  This particular assignment is timed, so the writer must think fast and not be hung up on being "perfect".

Have you got any fun writing prompts that you would like to share or did this in your class with some good results?  Let us know in the comments!
Posted by Lord Alford at 3:00:00 AM No comments:

Hey guys!  Exams are this week, so I'll make this post brief.

Good luck with your exams and the start of a new semester!  We are about to try out hybrid learning.  I can't say I'm too thrilled about the new challenges that is going to bring, but at least we can say teaching is never boring! 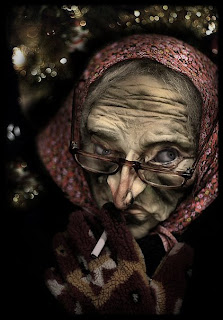 At first I was thinking that the early Christians had the right idea to celebrate Christmas for twelve days, but then I started to realize that today we start the Christmas season the day after Thanksgiving and celebrate a lot longer than twelve days!

Back to the twelve days, on the twelfth day (January 5th), not only are you supposed to give your true love twelve drummers drumming, but children should prepare for the coming of La Befana. In Italy, on the Epiphany (Jan. 6th), La Befana, or sometimes known as the Christmas witch, brings fruits and small goodies to stuff in children's stockings that they hang by their bed. If you're a naughty little chap, she'll give you charcoal. She travels by either broomstick or on the back of a donkey, and so doesn't have the capacity for large toys like Santa. And for the adults, she sweeps the floor before leaving (Nice!)

Speaking of Santa, she also doesn't frequent malls for kiddies to hang out with either. She is a witch - ugly nose warts, rags, haggish cackle, and all. But children in Italy seem to love her all the same. She is rather rotund and it is common to leave her, not milk and cookies, but a glass of wine and a small doll.

How did she get her start? Well, according to legend, she was cleaning house when these three wise guys showed up looking for Jesus. She thought they were full of it and chased them off, only later to have some second thoughts. She ran out to help them, but had dallied too long. They were long gone. Distressed that she missed her chance to help the baby Jesus, she began handing out gifts to children hoping that one of them was the baby Jesus.

An alternate version is that her son was one of the babies killed by King Herod. She doesn't believe he is really dead, so she goes out in search for him every Christmas. Personally, I like the first one better.

Regardless of the origin, her search turned her old, gray, and into the hag-like appearance she now has. Finally, she found Jesus and laid all her gifts (or her son's belongings) before him. He called her "Befana" (giver of gifts or the White Witch) and gave her the ability to deliver gifts each year on night before Jan. 6th.

This is a place to get ideas that work in the classroom, find things that English Teacher like, or to get a review on some piece of technology or web site that may or may not be useful in the class.

Get Updates on New Posts by Email