Word of the Day - Villain

So our word of the day is VILLAIN, but what's the fun in that?  We already know this to mean bad guy or antagonist.  An evil character designed to push the plot.

But that definition wasn't used for the word until 1822.  Before that, it was used to mean a peasant.  Here is what the Online Etymology Dictionary has to say about it:

The most important phases of the sense development of this word may be summed up as follows: 'inhabitant of a farm; peasant; churl, boor; clown; miser; knave, scoundrel.' Today both Fr. vilain and Eng. villain are used only in a pejorative sense. [Klein]

The root word is where we get the word "villa" from, meaning a large and fancy country home.  We know "village" to be a small country town (villa meaning country) and "villager" meaning one who lives in a village.  A "villager" at one time meant an uncouth country hick, instead of one living in a village.

So when you are giving that Middles Ages introduction and you hit the feudal system, consider letting them know that serfs and peasants were the original villains of the world. 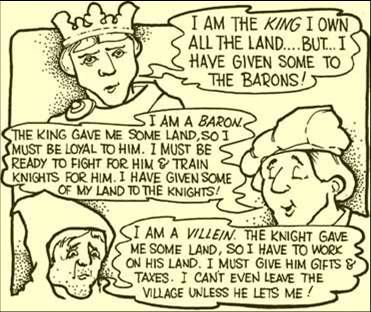 This is a place to get ideas that work in the classroom, find things that English Teacher like, or to get a review on some piece of technology or web site that may or may not be useful in the class.

Get Updates on New Posts by Email