Juxtaposition is a fun technique that is used quite often in literature. This term is used when two things (actions, colors, settings, words, anything) are placed side by side for contrast or comparison purposes. For honors or AP students, it could be an entry point that leads into a thorough breaking down of the text.  For regular level students, it can be quite intimidating of a concept, though once explained properly, can be as easy as basic symbolism.

That poses the problem - how to teach this effectively and easily to students?  I have a solution.  This will take anywhere from 20 to 45 minutes depending on the amount of discussion  you class is willing to put into it.

If you want to make changes to it, just click FILE then MAKE A COPY. 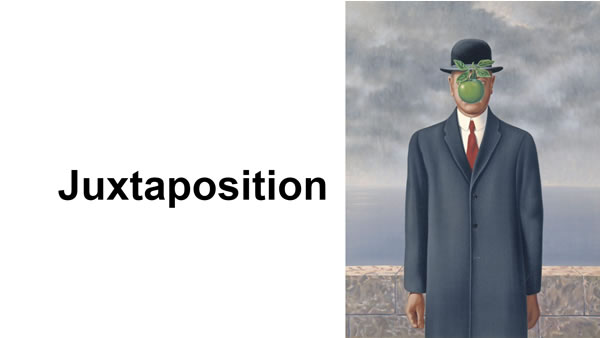 The presentation starts with a song.  The song used is "The Letter" from the Macbeth soundtrack.  Have students listen to the first part of the theme,  It is very harsh with the violins but tell them to wait for the piano.  Once the piano hits, it is a soft and gentle sound, made all the more so by the fact that the composer uses juxtaposition with the harsh violins.  If you've read Macbeth in your class, you can point out that this particular song is played when Lady Macbeth is introduced for the first time.  She receives Macbeth's letter and we get contrasting portrayals of her.  The first is rather harsh.  She gives her whole "unsex me" speech and reveals her first thought is to murder the king.  However, more subtly and often over looked is the fact that Lady Macbeth and Macbeth have a very loving relationship.  It is often overlooked since it is overshadowed by her power move here.  Think about this - when something big happens to Macbeth, what is the first thing he does?  He writes a letter and sends it off to his wife.  He wants her to be the first to know.  When they talk, he values her opinion.  This isn't a shallow Romeo and Juliet type deal' Lady Macbeth is his partner. his confidant. his closest advisor.

The presentation follows up with a few still images that show juxtaposition.  This should help students that are more visual learners.  Next  it shows two video examples of juxtaposition.  The first is used for horror.  It is a scene from Jaws.  The whole scene shows what should be a relaxing day at the beach, yet the whole time the sheriff is uptight and nervous - a stark comparison to the care-free activities around him.  You get other examples that are hard to miss as well.  In once scene, a child is building a sand castle and singing "Do You Know the Muffin Man?" while in the same shot a guy is frantically searching for his dog.  Then again when the shark attacks another boy and in the same shot, you see other kids happily playing in the water, blissfully unaware of the carnage right behind them.

It's followed up with another video from Seinfeld that uses juxtaposition to show humor as poor Elaine struggles on an airplane in coach while Jerry lives it up in first class.

Finally, there are four examples of juxtaposition in text, each one a little longer and more complex than the first.

Hope you are able to use it and enjoy it in your classroom!